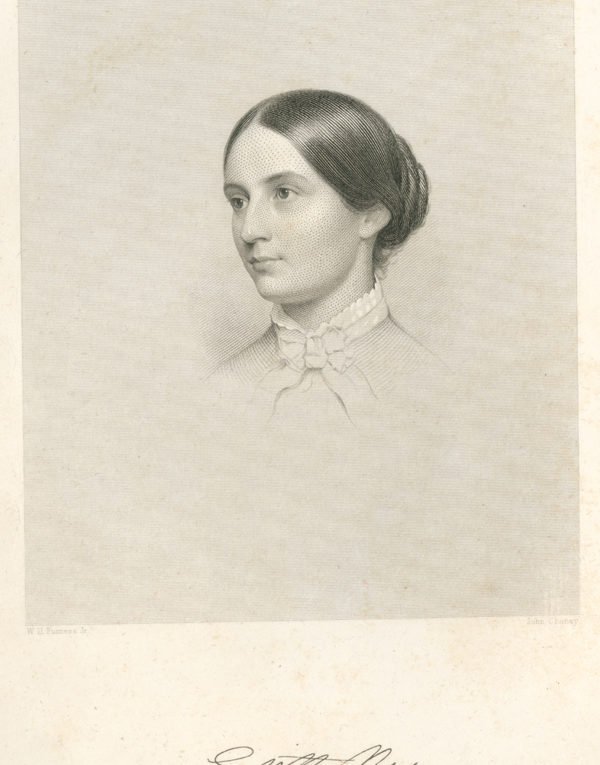 Anna Drinker, once a well-known woman in the society pages of Philadelphia and beyond, and a published writer under the name of Edith May, was a recluse at the end of her life, leaving a life of mystery in her wake. A number of articles appearing in the news after her death in 1903 note her family background as the eldest daughter of a wealthy merchant and many mention the fact that in 1884 her brother Joseph attempted to murder the man that he felt did nothing to prevent his sister’s  confinement in an asylum. Actual facts about her life are sketchy and hard to find, but the article from the New York Herald below gives a clue about some of the family history.

SHOT BY A CRANK

A BANKER FATALLY WOUNDED WITHOUT APPARENT CAUSE

Montrose, PA. June 15, 1884. Late last night, William H. Cooper, one of our most wealthy and prominent citizens, was shot by Joseph Drinker,a peculiar character, who is a member of a family with a singular history. Mr. Cooper, who has been a banker here for a number of years, in company with a merchant, Mr. Sparks, was going down the street from the Post Office, when Drinker ran out from a tailor shop behind them and fired two shots in rapid successon, one striking Cooper under the shoulder blade and the other lodging in the loin. A third shot then followed, without hitting anyone. Mr. Sparks ran in to his store, to which Mr. Cooper was soon assisted. Drinker was seied from behind just as he was firing the fourth shot and his revolver taken from him. He was lodged in Dr. Decker’s store, where Sheriff  Pope tok him in charge and locked the sotre from the crowd, which demanded that the door be opened and Drinker lynched without furhter process. The Sheriff took him out the back way and through an alley to the jail, while the crowd still beseiged the store, eager for lynch law.

Drinker was unconscious after his capture, and on recovering threw off a heavy dose of laudanum, which he had taken just before the shooting.

There was no cause for the deed, except that Drinker was not sane at the time, as no animosity existed between Mr. Cooper and he. Drinker’s mother suicided with ether a year or two ago, and his brother, a prominent physiician in Gibson, Pa., committed suicide a short time ago in a like manner, and his elder sister, Anna, has been in an asylum for a number of years. The father and mother are said to have been cousins, and being possessed of considerable property their children were brough up in ease and without work, though Joseph is said to have run through most of his and without drinking.

The bullets had not been found up to a late hour this evening, but Mr. Cooper’s case is fatal.

William H. Cooper dies as a result of his wounds on July 3, 1884; his father, Huntting Cooper died the day before.

Other articles appearing around the same time noted that Joe Drinker blamed Cooper for not doing anything to prevent Anna’s incarceration in the asylum, which had apparently happened about ten years earlier. In some articles, it was stated that Joe was the heir to the Drinker estate and that Cooper had been a guardian of his sister Anna. One way or another there is a lot of confusion about this branch of the Drinker family.

Finding actual facts about this family is a bit of a challenge, but it is known that Anna, or Annie as she was sometimes called, was born in 1827, the eldest child of Joseph D. Drinker and his wife Elinor Skyrin. She was published in a number of journals in the latter part of the 1840’s and a book of her works was published in 1853. She is a direct descendant of Elizabeth Sandwith Drinker, the noted Quaker diarist, and her parents were, in fact, second cousins.

In 1885, Anna was released from the asylum in Harrisburg, as noted in this piece from the Harrisburg Daily Independent of 9/28/1885:

Released from the Asylum

Anna Drinker, of Philadelphia, who has been an inmate of the lunatic asylum for ten years has been just been released through the intervention of the Lunacy Commission. This lady at one time gained quite a reputation as a writer of verses under the nom de plume of “Edith May”. Miss Drinker is believed to have fully recovered her reason and has gone to the Covalescent Retreat, near Glen Mills, where she will remain for some time.

Anna had two brothers, Charles Jervis and Joseph D. Since we already know about Joseph, we can turn to Charles, the one that allegedly committed suicide. It appears that this is probably a case of mistaken identity on the part of the author of the first article, as there is a Charles Drinker who suicided on July 27 of 1870 but he was the son of Henry W. Drinker, not of Joseph and Elinor. In the Montrose cemetery, there is a stone for Charles Jarvis Drinker naming him as the son of Joseph and Elinor: “Died Oct. 19, 1869, Aged 33”

A number of articles suggest that Cooper had been a guardian of some type of either Anna or Joseph, Jr. or perhaps both, but the possible sequence of events in their lives is a bit hard to determine. If Anna was realeased in 1885 after ten years, she would have been placed in the asylum about 1875, at which point her father was still alive as he died in 1881. Why would a guardian need to be named at all? At the time of Joseph the elder’s death, three of his children were still alive – Anna, Joseph Jr. and Frances. Prior to the probation of his will in 1882, a codicil had been added which states:

It would appear that there must have been some sort of falling out between the father and his living children, but like many other details about this famed family, the facts are likely to remain obscure.

The Drinker family of Philadelphia was one of the older and better Quaker families of the area, so if your ancestors include Quakers from this area, you can reasonably expect to find a Drinker connection somewhere in your tree.