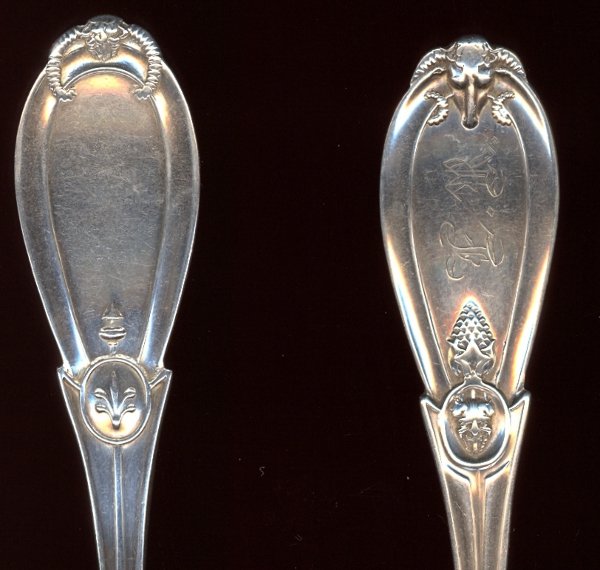 While most of us have some old family photos lurking around that help to flesh out those noted ancestors of ours, it can also be a lot of fun to track some of their belongings as well such as jewelry and household furnishings. While recently going through my mother’s old silver chest, I found a set of twelve silver spoons bearing the monogram of “E R” that apparently belonged to my great-great-grandmother, Elizabeth Jane Rankin, aka Lizzie.

Lizzie married John McCune in 1868, so the spoons were no doubt part of her hope chest prior to her marriage. The spoons carry the patent date of 1862 and the name J. Stevenson & Son, but were actually a Whiting pattern called Grecian. The spoons have a ram’s head at the top and a gargoyle in the center, so they are rather unusual looking, to say the least. My daughter has decided that it’s rather interesting to have an ancestor who apparently liked rather ‘gothic’ silverware, so these will be earmarked for her own collection. Lizzie was also the source for at least two other interesting artifacts – a sterling bangle bracelet engraved with her name and an old mourning bracelet.

Lizzie’s father was William Rankin, a well-established citizen in Shippensburg, so it is quite likely that the family was well-off, as were the family of John McCune, her husband.The McCunes remained in the Shippensburg area, and were buried at Spring Hill Cemetery. Lizzie’s daughter, Mary Kezia, married John B. Bratton and subsequently settled in Carlisle, where my grandmother was born and raised. As quite a few of the family silver pieces have come from this branch of the family, it has been interesting to figure out who owned which pieces – thankfully, most of the most interesting pieces do bear monograms to help determine ownership.