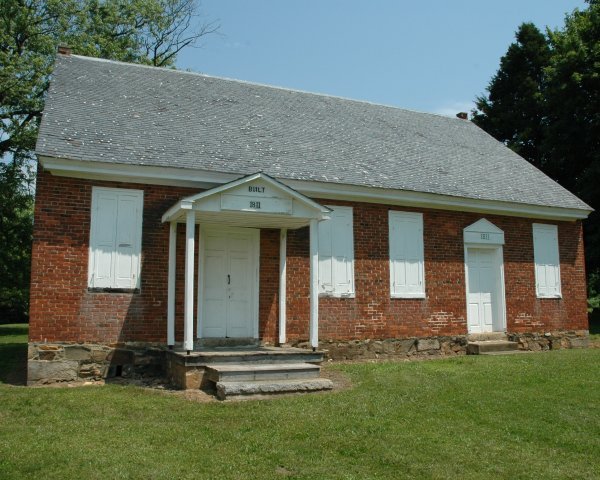 West Nottingham was established about 1710, held at the houses of the members initially, with a preparative meeting being set up about 1730. The land on which the meetinghouse sits was donated by James King and William Harris. The current meeting house was built in 1811 and became known as “Little” Brick”. The Nottingham meetings were both originally under Philadelphia Yearly Meeting, but were joined to Nottingham Quarter when the Cecil county meetings were transferred to Baltimore Yearly Meeting in 1819.

In 1911, an anniversary meeting was held to celebrate the centennial of the erection of the meeting house and an article appeared in the Friends Intelligencer noting the occasion, as quoted by T. C. Matlack:

Success is the word that may be applied without reservation to the celebration of the 100th anniversary of the building of West Nottingham Meeting House which took place on seventh day, the 16th. This small, but substantial, cozy and well-preserved brick house is beautifully located a short distance west of Rising Sun, Maryland. Although the building is no longer regularly used as a meeting place, the property continues to be the object of much pride with some of those who worshipped in it many years, and the building appears to be in the very best of repairs at the time of the anniversary meeting. The fact that the house is no longer used as a regular meeting place does not mean that it is the former house  of a dead meeting. With a view to ‘adapting means to circumstances’, West Notttingham meeting was moved a few years ago to Rising Sun, most of the members and attenders living in tat town or the immediate vicinity. While weather conditions on the morning of the 16th were not very promising, this did nto lessen the enthusiasm of the committee having charge of the event nor did it seem to interfere seriously with the attendance, although it was thought fear of a wetting kept some away. There must have been at lease 300 people on the grounds in the morning. The entire neighborhood turned out, giving a good example of how Friends may use even unused meeting house properties as neighborhood centres.

The question remains regarding when the meeting itself was laid down, after the move to Rising Sun. Matlack further mentions that by 1931, the meetings in Rising Sun were only held once a year.

The Meeting is also generally known as Harrisville Friends.